What is Deep Transcranial Magnetic Stimulation?

It is an innovative treatment of neuropsychiatry, which is based on generating non-invasive neuronal stimulation that allows for an increase in neural connections, helping patients to improve at a quicker rate.

It is a safe and reliable technique, without side effects or complications.

Deep Transcranial Magnetic Stimulation is approved for use by the FDA in several countries (Europe, Canada, Australia, the United States and by COFEPRIS in Mexico). 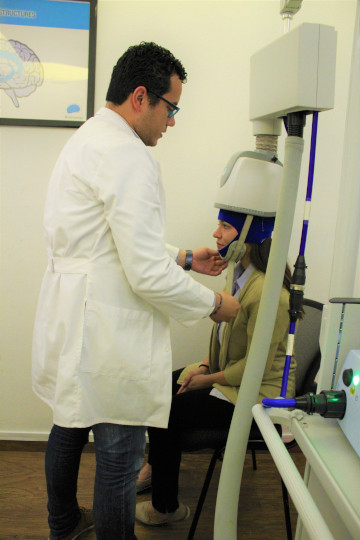 This treatment is also indicated for those people who have not responded adequately to medication or who due to some physical condition cannot take medication, such as:

It is currently the cutting-edge treatment for people suffering from psychiatric disorders, such as:

Depression is an emotional state where symptoms such as irritability, pathological sadness, lack of pleasure, guilt and a considerable decrease in energy prevail; symptoms are usually addressed through the use of drugs and psychotherapy.

Forty percent of people suffering from this disorder do not respond adequately to antidepressants, which is why Deep Transcranial Magnetic Stimulation allows the person to be treated comprehensively, achieving a significant and profound progress in a shorter period of time. It is the most innovative option to help these patients with an effectiveness rating of 71% according to various studies.

Fear is a natural response in an organism that faces a threat. Because of this reaction, various biological and psychological processes are generated that allow the body to act in the face of the situation, either by facing it or seeking to protect itself from harm, by fleeing from it. With Post Traumatic Stress Disorder, the person will suddenly feel the emotion experienced during a traumatic situation even when he or she is not exposed to that same or similar situation.

The DTMS plays an important role in the control of symptoms of post- traumatic stress mainly for the 24% of the population suffering from PTSD that has not responded to other treatments. Neuroimaging studies have shown that anxiety is visible through the high activity of the right frontal regions. Deep magnetic stimulation helps reduce hyperexcitability and levels the neurotransmitters associated with stress responses.

Bipolar Depression is a condition that involves constant mood changes. They can go from being very accelerated or euphoric to extremely low and desolate. A period of high activity is known as mania, while the strong feelings of emptiness and despair are known as depression.

Deep Transcranial Magnetic Stimulation works by stimulating specific areas in the brain to promote improvement in the mood of people with Bipolar Depression.

Schizophrenia is another of the mental illnesses that occurs where the person stricken and his or her family sufferers terribly because the onset usually happens in the most productive stages of life, i.e., in adolescence and young adulthood. It is a deteriorating disease that prevents the person from engaging in his or her work or professional activities, constituting a great economic and emotional burden for the family; One percent of the world population suffers from schizophrenia.

Therefore, Deep Transcranial Magnetic Stimulation appears as an effective alternative and without side effects for these patients.

Does DTMS cause any pain? The treatment is non-invasive, which means that the procedure is simple and pain-free. It consists of the application of a helmet on the head that will produce magnetic waves to stimulate certain areas of the brain.

Who are NOT candidates for this type of treatment? People who have metal plates in their skulls and some patients with epilepsy, so a prior assessment is required in these cases.

Where can I get this treatment? Currently, CADE offers this treatment. Write us or call us, and we will gladly answer any questions.